Sorry for the LinkedIn invite

a quick apology for the LinkedIn invitation which seems to have been sent to every person I’ve ever emailed. I don’t think it’s a virus, but rather a feature in LinkedIn which makes it very easy to accidentally spam the whole world.

At the start Dan Appelquist gave a brief presentation on !The Future of the Future of Machine to Machine”

He had a quick look not just at Arduino but also the future of mobile – what will mobile tech look like in the future? In 2005 we thought maybe a clip?  bracelet? For now – we simply have a brick. Is this the end of innovation?

He explained that nowadays it’s more about machine to machine – connected cars, smart appliances…..boring use cases…not exciting or inspiring…..the ideas aren’t developed with user in mind – more the corporation.

He’s interested in how we create the next phase-  Nabaztag never really took off – too closed a network.  Connected apps, Drive to Improve app – have a device to plug into your car – monitors you engine performance – you need physical components to allow you to connect to your car.  How can we help protoype developers create things connected to the internet?

Arduino – obviously – and open source…and this workshop was taking a look at what others would do with equipment being sold at cost….so what did we come up with?

Girl next to me created an app that allowed a user to call an arduino and receive a message – here’s her blog with instructions on how to do it and a much better intro to the shield: http://lilydev.wordpress.com/2013/05/04/playing-with-the-arduino-gsm-shield/

Guys opposite set up the arduino to turn on a red, green or yellow light depending on a text from the phone (R, G or Y).

Francisco designed the Arduino GSM board with Telefonica RnD

Usecase idea: connected fishtank – feed your fish through the web.

Arm and mbed are arduino alternatives

Shield is currently a product and being sold by the Arduino store.

How do we put the tools in people’s hands to build next gen internet connected things?

Shield that sits on top of the Arduino

Latest Arduino SDK – Examples – GSM included! (i need to check for the motor !)

Somewhere below the middle – 3 lines to send SMS – e.g. put the number in etc…

There’s also a “ReceiveSMS” option.  All the examples are integrated with the libraries.

The shield has a sim – it has SMS capability but it’s primarily a data sim.  Primarily intended for pure data.  you can send SMS’ but only between sims within that catagory (e.g. arduino to arduino).  These are the SIMS bundled with the shield.  You can plug it into the shield and activate it and you can add data allowance onto it.  Not required – can use your own, whatever you want.   good if you want to put it in a shipping container and see where it turns up because has some kind of international rights – 35 countries (small amounts of data), out of the box.  It roams the networks – but with no roaming charges.

If you want the best power efficiency – use SMS and then drop the connection as soon as you’ve sent the message.  You stay connected until you disconnect – only charged for the data you send, regardless of  how long you’re connected.  Can be constantly connected – just like your phone.  Sometimes a little data is used during the handshake. Once the pdp is connected it’s like being connected to a wifi network.  It’s 2G

It’s 6 or 12 month allowance on the data plan.  The SIM itself can be topped up…disconnected if you don’t use it in the 6 or 12 months – but you can reactivate it.

Can do SMS and voice at the same time but not Global Positioning Radio Satellite and voice.  What does GPRS and GSM – global system for mobile communication.

THIS IS EXACTLY WHAT I NEED….essentially a phone that attaches directly to the board so I don’t need to learn how to communicate with the phone!  Lovely. Makes a lot of the research I made last year slightly pointless – wait a few more years and I won’t even need to be able to programme.

Can get details of the shield on the arduino.cc/enMain/ArduinoGSMShield page.

9 girls, 16 boys in our session.  Are more girls getting into programming?  Or does arduino appeal more to girls as it’s less abstract?  Guess I can’t read too much into it!

Quick note to myself – difference between art and design and craft?  Would be interesting to create a diagram – starting with things considered true art – moving towards design (craft?) – where does one start and the other end.  Does reproducability have anything to do with it – really? outside of existing theories?  dunne and raby – create something that’s a cross between art and design – questioning the world through design.  Asking questions – their stuff looks like commercial objects but you can’t buy them…what do I want to make?  where does it sit?  I want it to be extremely beautiful – to do something magical but I guess ultimately sellable.  Does that mean it can’t be art?  If I make it once and keep on producing it? How many copies can I make before it stops being art I wonder? 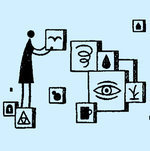 Who knew there was such a mainstream market for artfully arranged pictures of other people’s stuff?

There’s a German word for it, of course: Sehnsucht, which translates as “addictive yearning.” This is, I think, what these sites evoke: the feeling of being addicted to longing for something; specifically being addicted to the feeling that something is missing or incomplete. The point is not the thing that is being longed for, but the feeling of longing for the thing. And that feeling is necessarily ambivalent, combining both positive and negative emotions.

See on Scoop.it – Wearable tech and biosensors for learning 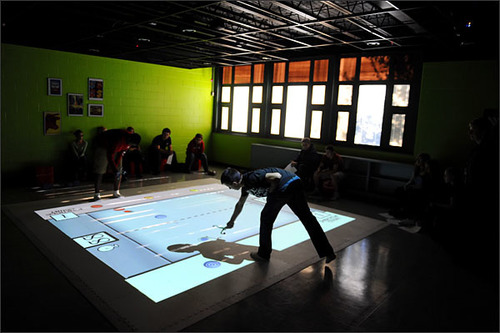 Full-body gaming for learning at a school in Port Elizabeth

Monumental. I think it has something to say to every one of us.

Great programme today about memory, the value of digital devices and our relationship to technology.

Nice to remember we have always been cyborgs and used transcribe memory.

I meant to blog this before but I’d also argue that humans have always essentially been hackers. It’s what distinguishes us from (most) other animals.

The virtue of silence and the new nature of wisdom. Space for reflection?

I absolutely love this program on Radio 3 considering now new media is altering how we know things, how we reflect and how we consider wisdom.

I think it captures the disquiet i feel about the use of biosensors to explore emotion and  how bodies in relation to learning – in particular it’s ability to support (or more importantly impede) reflection.

But the I have a strong dislike of constant noise…I’m one of those people who simply can’t work or think with the radio on…unlike my Dad who I always remember would liked to marking essays whilst watching television and listening to radio 4.

How the cell phone can improve health care